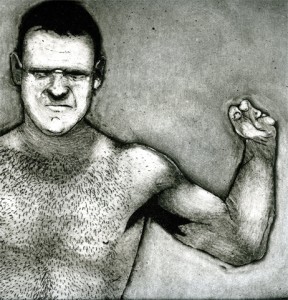 Jon Mayers is a North London based artist who works in a variety of mediums; etching, silkscreen, painting on canvas and found wood.

Originally a Psychiatric Nurse from Gravesend, a Kent town on the Thames Estuary, he graduated from the Royal College of Art in 2010 and continues to make and show work in group and solo shows.

Jon has ‘fetal band syndrome’ meaning that his left hand and forearm stopped growing prematurely in the womb, and briefly wore a prosthesis when he started secondary school. It had a large zip up the front and was mistaken for a novelty pencil case by an embarrassed teacher. The prosthetic hand was short lived as Jon preferred having a ‘weird’ hand to a plastic one.

For many years Jon has been a practitioner of Kickboxing, Kung Fu and more recently Mixed martial Arts and struggles with nothing except juggling, an issue he has now come to terms with. 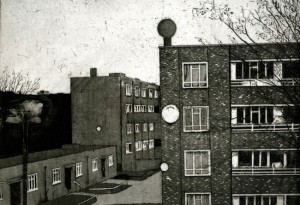 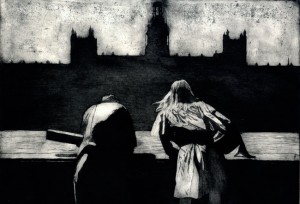