On Show: A year 11 student to exhibit at the Powerhouse

Shailer Park’s Breanna Stewart has a foot in the door of the art world after being selected to join 40 others in the Spare Parts exhibition at Brisbane Powerhouse on Tuesday.

The exhibition showcases a diverse range of artists all using pre-loved prosthetic limbs as their canvas.

Breanna, a Year 11 student at Redeemer Lutheran College, won the schools competition from more than 50 entries.

“I’d never seen a prosthetic leg before and it was really interesting working with one,” she said. 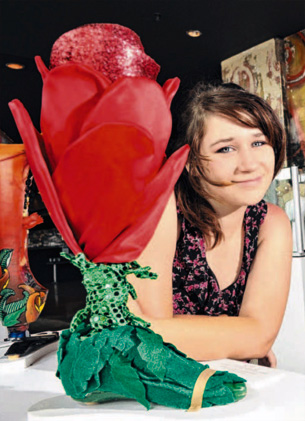 “I initially wanted to make it Japanese style, but I really like the colour red and it became a rose.”

Exhibition curator Priscilla Sutton, who became an amputee five years ago, said the exhibition would create and promote conversation about prosthetics.

“The diversity of artists is a very important component of the exhibition as is their interpretation of each limb,” she said.

“The competition broadened her experience and made her more aware about people who’ve lost limbs,” Ms Etchells said.

The opening night for the exhibition is November 12 and it will run until December 5.

Exhibition curator Priscilla Sutton has praised the work of Shailer Park’s Breanna Stewart after she won a school competition to have her rose prosthetic leg creation displayed at the Brisbane Powerhouse.

Artistic lease of life for limbs

Redeemer Lutheran College student Breanna Stewart was selected as the only student in Brisbane to have her art work displayed in a unique exhibition at New Farm.

The Spare Parts Exhibition was conceived by amputee Priscilla Sutton to bring together a diverse range of artists all using pre-loved prosthetic limbs as their canvas.

Breanna’s sculpture The Rose is on display amongst the works of 40 diverse artists, some of which are renowned for their talents worldwide.

“So far the event has appealed to everybody,” Priscilla said.

“The diversity of artists is a very important component of the exhibition as is their interpretation of each limb.

“I thought Breanna’s idea of The Rose was quite a unique idea”. It definitely wasn’t a simple challenge for her. The 16-year-old said she was thrilled to have her sculpture displayed among such high contenders.

“It took me 10 weeks to make and I found it really interesting and different to work with prosthetics,” she said.